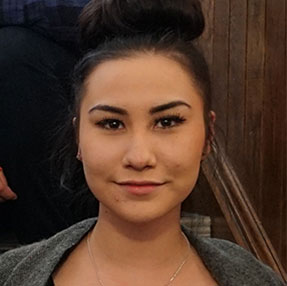 The Central Region of In.Business has a number of ‘keeners’; students who surpass expectations. Hailey West is one such student. As I write this, I am nominating Ms. West for a Youth Role Model Award through the City of Winnipeg. When I suggested it to Ms. West she jumped at the opportunity, just as she did when she applied to In.Business

In addition to impressing commitment and dedication to her academic work both through In.Business and her school, Sturgeon Heights Collegiate, Ms. West also volunteers. She has been growing experience as a volunteer since the age of ten; from helping out at community events to being an ambassador for the Assiniboine Park Zoo, to coaching gymnastic students. She is in the Student Ambassador program and Sources of Strength program at school with the former focusing on welcoming newcomers, the latter focusing on suicide and depression prevention amongst her peers.  In her work welcoming newcomers she has expanded on her bilingualism (French and English) to know basic German, Russian, Portuguese, Spanish, Korean, Filipino, Mandarin and Farsi.

What many will not know is that Ms. West is a former ward of Child & Family Services in Winnipeg. With one of the highest rates of Indigenous children involved in the system, there has been a strong push to support students like Ms. West to pursue education. At our partner institution at the University of Winnipeg, Associate Vice-President Wab Kinew ensured that the Youth-in-Care received a Tuition Waiver. This program waives the tuition of former students of the Child and Family Service Authority eliminating a barrier to these students to attend post-secondary.

Ms. West has demonstrated that perseverance despite barriers pays off, including living on your own while completing your high school education is achievable. And not only is achievable, but that it can be done to a degree of excellence with dignity and focus. Hailey continues to be a model student, one that will reverberate within the community for years to come. My dream for other youth in similar situations to Hailey is that they get to hear her story, and learn from her that more is possible for them.